How did a designer get the four-word phrase on the tags of Patagonia’s Stand Up Shorts? Organizational alignment.

“Vote the assholes out.” Patagonia made headlines in September when people discovered this message on the underside of the clothing tags in the company’s Regenerative Organic Stand-Up Shorts and began posting photos of the tags on Twitter. Given the company’s history of activism and vocal resistance to the Trump Administration’s denial of climate change and environmental policies, there was speculation that these tags were part of a long-planned strategic campaign; they were not. The tags were the idea of one designer. 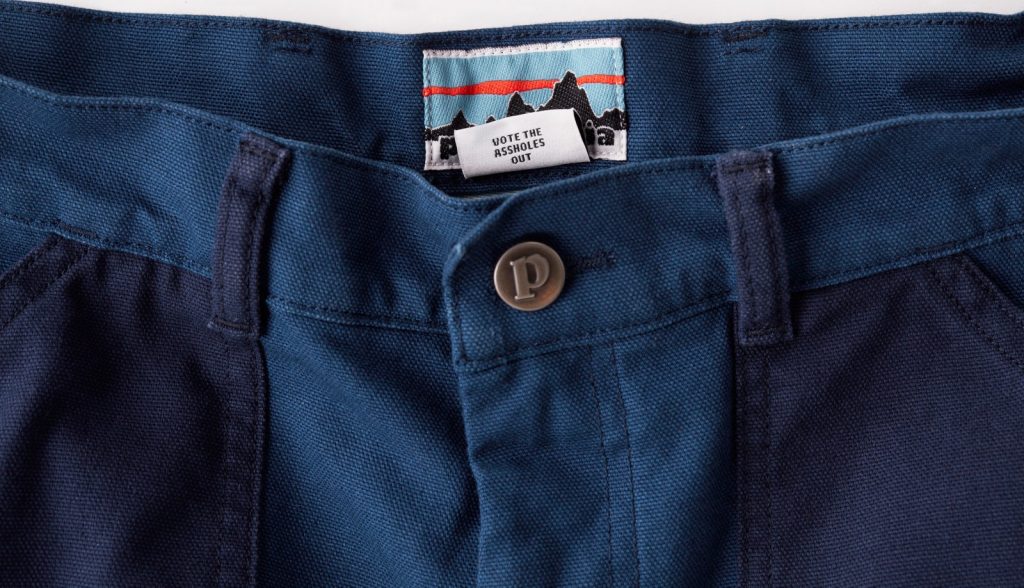 The designer, says Dean Carter, Patagonia’s Vice President of Human Resources and Shared Services, decided it would be “funny and appropriate” to put “vote the assholes out” on the back of the tags and so he went with it:

He said, ‘hey, I’m going to put this on the back of the shorts,’ talked to his manager, and the manager was like, ‘okay,’ and it went out. No one approved it, [it] didn’t go to the executive team as a marketing campaign; it just showed up virally. We were like ‘oh, wow!’ We were seeing it, to some extent, when many of you were seeing it.

Dean continued, “The point [of the story], is that this designer was crystal clear about our values, our mission, and the work we were doing, and could make decisions like that that could be applauded.”

Patagonia is renowned for being rooted in the company’s values and for its activism. The company has supported environmental groups, spoken out against climate change deniers, and even sued President Trump.

And the four-word phrase sewn into the tag of the shorts – that is a phrase that has long been used within the company and by Patagonia’s founder, Yvon Chouinard, to encourage people to vote out politicians (from both parties) who deny that climate change is real. Earlier this year, Chouinard included the phrase in a postscript of a letter he wrote to the 1% of the Planet Community.

When an organization is aligned, there is a shared understanding of purpose, and of the strategies, goals, and tactics that will make the organization successful. Organizational alignment energizes the organization, enables people to take action, and empowers people to work towards a shared goal. Further, when there is alignment, people not only have the autonomy to make decisions by themselves, but they also trust each other to make the right decisions. This story highlights the alignment across Patagonia on the company’s values, mission, and work.

In an interview with Esquire, Patagonia’s Global Director of Communications and Public Relations, Corley Kenna, shared that the company was thrilled about the attention given to the tags because it drove traffic to the website where people could learn more about the climate crisis and climate change:

[W]hat’s good about the spike in traffic to our website is, when you go to our website, you can learn all sorts of things about these issues. Right now, when you go to the homepage of our site, it features a trailer for our film that will be released next week, Public Trust, which is all about the threats facing our public lands and waters. But there’s also space on our site encouraging people to make a plan to vote. So, to do something about these politicians that are denying the climate crisis, that are not listening to the science, the scientists, and really just lots of resources for people to take action and learn more.

If the designer worked at a different company and had put these tags on a line of shorts without getting executive approval, he likely would have been fired. However, when the designer put that four-word phrase on Patagonia’s Stand-Up Shorts, he did so because he was aligned on the company’s goals – he was clear on the company’s values, mission, and work, he knew he had the autonomy to act, and he understood his actions would call attention to issues important to Patagonia.

Organizational alignment is a catalyst for speed and a cornerstone for accelerated growth. Research accentuates the important connection between an aligned organization and an organization’s sustained performance. Aligned organizations grow faster, are more profitable, and perform better on indicators including customer retention, customer satisfaction, leadership effectiveness, and employee engagement, than unaligned organizations.

Be the Change; Change Begins With YouChange, COVID-19, Leadership, Strategy

To Lead, You Need to Listencommunication, Leadership